Directory of community and social organizations

You can refer to the list of community, public and parapublic organizations, and find them on the map for the regions served by the 211 Greater Montreal.

A non-profit organization (NPO) is a group of individuals pursuing a moral or altruistic purpose who do not intend to make pecuniary gains to distribute among the members of the group (Registraire des entreprises).

Most NPOs in our database are incorporated, which means that they are registered in the Registraire des entreprises and at the federal level under the Canada Not-for-profit Corporations Act. These organizations have certain responsibilities, but also certain privileges. Some organizations are not incorporated, however. These are rather rare in the services we refer to, but, for example, some advocacy groups specialized in specific topics or self-help groups do not always have to be incorporated.

To find out if an organization is an NPO in Quebec, you can look in the Registraire des entreprises. Under “Forme juridique,” you should read, “Personne morale sans but lucratif.” Under “Régime constitutif,” you should read Quebec Companies Act, Part III.

All charities are also non-profit organizations, but not the other way around. To issue official receipts for donations or for tax exemptions, you must be registered federally as a charity.

To find out if an organization is a charity, you can consult the Canada Revenue Agency database.

The public bodies in our database are classified based on the governmental decision-making level: federal, provincial or municipal.

Parapublic organizations are independent entities that are not directly managed by the government. However, they remain the responsibility of the government and are publicly funded.

Businesses and cooperatives are generally excluded from our database because of our exclusion policy. Our database nevertheless includes some companies in specific fields for which there are no public or non-profit services.

What about social economy?

The term social economy is recent and includes a much broader set of organizations.

According to the Quebec Social Economy Act: The term social economy refers to “economic activities with a social purpose carried out by enterprises whose activities consist, in particular, in the sale or exchange of goods or services […]”.

Social economy enterprises can therefore include NPOs, as well as cooperatives and commercial businesses whose purpose is to “meet the needs of its members or the community.”

Although non-profit organizations (NPOs) are extremely different, there are some inescapable services that can be found in most regions.

Community Development Corporations (CDCs) are the largest groups of non-profit organizations in Quebec. Their areas of action are community development and support for social economy. There are more than 60 CDCs in Quebec; they usually cover only one Regional County Municipality (RCM), but some work regionally or at neighborhood level (Montreal).

La Table nationale des corporations de développement communautaire (TNCDC) is the provincial umbrella organization of CDCs. You can find the list of CDCs in the province on their website at the following address: http://www.tncdc.com/reseau-des-cdc/

To find the round table serving your neighborhood, consult the map below of the Coalition montréalaise des tables de quartier. 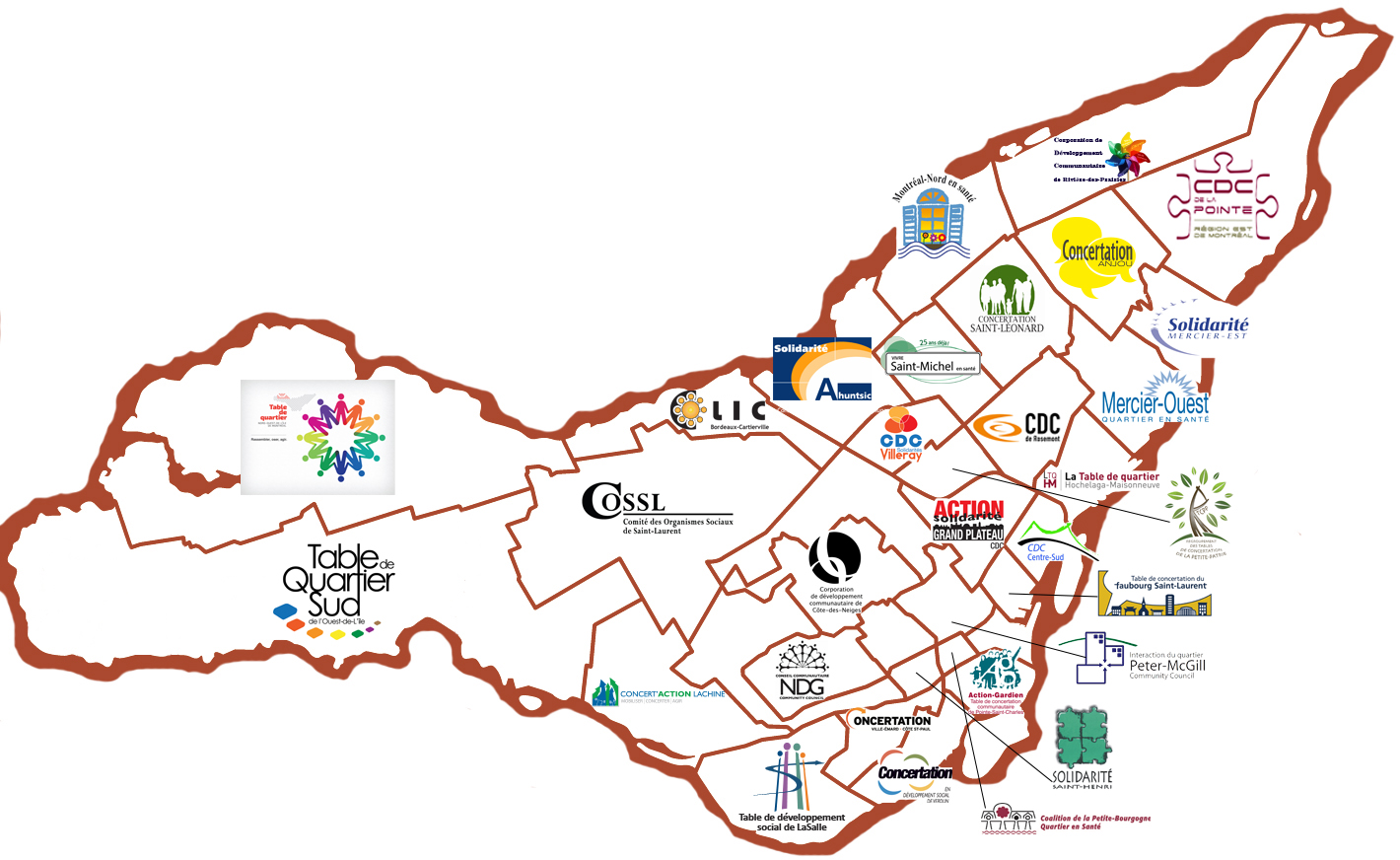 Other Provincial and Regional Groups

Apart from CDCs and neighborhood round tables, there are other community-based umbrella organizations.

In the regions served by the 211 Greater Montreal, there are also umbrella organizations at a regional level:

In addition to the multi-sectoral issue tables (which cover all subjects), there are also numerous sectoral issue tables that focus on specific topics such as: food, families, seniors, immigration, etc. Some of these groups work at a provincial level, but most operate in a region, a city, or even a specific neighborhood.

Our database contains nearly 200 consultation organizations of all categories.

As flagship organizations in the community, volunteer action centers exist in almost every region of Quebec. Depending on the population, volunteer centers serve the entire RCM, a city or a neighborhood. Volunteer Centers’ main mission is to support the development, coordination and training of volunteers. Each center can also offer a range of services such as food aid, material goods, health clinics, tax clinics, friendship visits, etc.